“ChemRest makes navigating the challenges of chemical resistant hand protection easier for safety professionals by providing an entire chemical resistance portfolio of products, resources and tools in one platform. Based on well over 70 years of product trials, market and customer research, and the joint experience of our 6000+ global employees, ChemRest offers 3 key service pillars that serve to reduce chemical-related injuries: education, evaluation, equipment.” Visit www.showagroup.com/us-en for more information.

Chemical protective gloves must meet the requirements of European standard EN 374. This standard was modified substantially in 2016. These changes became effective once they were published in the Official Journal of the European Union. 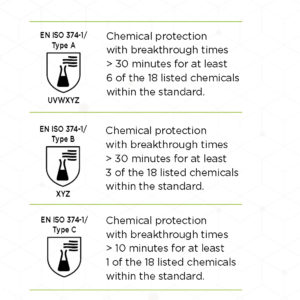 The changes that have occurred can be summarized by comparison, below.

The new standard, as of 2016, on the other hand, changes some of the language and also adds more specificity:

The test chemicals have also increased in number. The test catalogue was extended as per the new 2016 standard. The chemicals with code letters from M to T are new, and now include nitric acid (65%), acetic acid (99%), ammonium hydroxide (25%), hydrogen peroxide (30%), hydrofluoric acid (40%) and formaldehyde (37%).

You can identify a glove’s chemical protection performance by looking at the Type at the top of the pictogram and the letters underneath it. The Type will tell you how many of the 18 chemicals listed in the table were tested with the glove to check its performance, as well as the expected minimal length of the protection against these chemicals. The Letter code denotes the tested chemicals within the EN 374 standard.

The markings for protective gloves was also updated, as follows:

Why 2016 Changes are Important

The 2016 EN ISO 374 standard ensures consistency in testing and helps users and safety professionals determine their chemical protection needs. The revised requirements are reflected in pictograms that appear on gloves and on glove dispenser boxes certified for chemical and micro-organism exposure.

According to the ISO website, “ISO 374-1:2016 specifies the requirements for protective gloves intended to protect the user against dangerous chemicals and defines terms to be used. If other protection features have to be covered, e.g., mechanical risks, thermal risks, electrostatic dissipation etc., the appropriate specific performance standard is to be used in addition. Further information on protective gloves standards can be found in the EN 420.”

To purchase the standard, go to https://www.iso.org/standard/66421.html

By: Bob Henderson, Contributor “Federal and state regulations define the PEL for toxic contaminants, but do not specify how to set the alarms. Gas detection customers ...
Read More →

David Pariseau, Contributor Air quality monitoring is relatively new in the commercial space, and we’ve seen a number of issues and concerns that are remarkably similar ...
Read More →

By: Rob Brauch, Contributor Respiratory protection equipment (RPE) is a subset of PPE that has undergone rapid evolution and mass adoption during the recent global pandemic. ...
Read More →