“Federal and state regulations define the PEL for toxic contaminants, but do not specify how to set the alarms. Gas detection customers depend on manufacturers for guidance. The annotated Z-1 tables provide a side-by-side comparison that allows GfG to provide advice based on best practice as well as minimum requirements specified by OSHA.” GfG Instrumentation, Inc, 800-959-0329, www.goodforgas.com

The annotated tables provide a side-by-side comparison with the California Cal/OSHA PELs, NIOSH Recommended Exposure Limits (RELs) and the ACGIH TLVs®.  While the tables explain the statutory exposure limits, they do not directly provide advice as to how users of direct reading instruments should set the alarms.  Fortunately, the ACGIH “Guide to Occupational Exposure Values” provides additional guidance.

How you set the alarms in your gas detectors is a critical part of keeping workers safe. OSHA has annotated the Air Contaminant Z-Tables to clarify the differences between exposure limit guidelines and to help instrument users understand what is needed. (photo courtesy Adobe Stock.)

OSHA regulations use the term Permissible Exposure Limit (PEL) to define the maximum concentration of a listed contaminant to which an unprotected worker may be exposed during his workplace duties.  PELs are usually expressed as an eight-hour, time weighted average (TWA) exposure limit.  Exposure limits for gases and vapors are usually given in units of parts-per-million (ppm).  Limits for mists, fume and particulate solids are expressed in units of mg/m3.

Short Term Exposure Limits (STELs) are based on the average exposure over a shorter period.  Most STELs are calculated on a 15-minute basis. Ceiling (C) limits are based on a concentration that may not be exceeded for any length of time. The PEL for many contaminants includes both a TWA and a STEL, or a TWA and a Ceiling. Some include only a STEL, or only a Ceiling. When the PEL includes more than type of limit, no part of the exposure limit can be exceeded.

OSHA PELs are listed in Subpart Z (Section 1910.1000) of the Code of Federal Regulations. Subpart Z contains three tables (Z-1, Z-2 and Z-3) which list the contaminants which are specifically regulated by this standard. The PELs were originally issued shortly after adoption of the OSH Act in 1970. The Federal PELs set the highest allowable unprotected workplace exposure limits for these substances. Individual states either follow the Federal regulations, or follow their own, state-specific permissible exposure limits.  States may not publish or follow exposure limits that are more permissive than Federal OSHA limits.

The Recommended Exposure Limit (REL) is the name used by NIOSH for the occupational exposure limits (OELs) it recommends to protect workers. NIOSH over the years has been active in the study of chemical hazards and has updated the REL for many airborne toxic contaminants, sometimes more than once, since 1970.  Until adopted by OSHA, NIOSH recommendations are not automatically enforceable.  However, states are free to incorporate NIOSH recommendations as enforceable under their own state specific laws.

The updated OSHA rule was the subject of several legal challenges, and on July 7, 1992, the U.S. Court of Appeals, Eleventh Circuit, vacated the 1989 PELs. The current versions of the OSHA Z-1000 Tables reflect the Court’s decision. It also explains why there is such a large difference between the OSHA PEL and the NIOSH REL for many toxic contaminants.

State Plans are OSHA-approved workplace safety and health programs operated by individual states or U.S. territories. There are currently 22 State Plans covering both private sector and state and local government workers, and six State Plans covering only state and local government workers.  In most of these states, when there is a difference between the OSHA PEL and the NIOSH REL, the enforceable exposure limit in the state is tied to the more conservative of the two limits.  In some states the limits are based on the (usually) even more conservative American Conference of Governmental Hygienists (ACGIH) Threshold Limit Value (TLV®). Sometimes states modify their exposure limits based on their own findings.  California has taken this approach with several state specific PELs.

The ACGIH TLVs are among the world’s most widely used and respected guidelines for workplace exposure to toxic substances. TLVs are developed and designed to function as recommendations for the control of health hazards, and to provide guidance intended for use in the practice of industrial hygiene.  Although ACGIH TLVs are not expressly developed for use as legal standards, they are frequently incorporated by reference into state, federal, and many international regulations governing workplace exposure.  They may also be cited or incorporated by reference in consensus standards of associations such as the National Fire Protection Association (NFPA), or American National Standards Institute (ANSI).

Individual employers are in much the same position as states when it comes to workplace exposure limits. Employers can either follow the official limits; or follow their own more conservative guidelines.  Given the potential for lawsuits, many employers have made the strategic decision to base their corporate health and safety programs on the most conservative applicable recognized standards.  Since ACGIH recommendations are frequently more conservative than OSHA PELs and NIOSH RELs, many programs, especially the programs of prominent multinational corporations, use the ACGIH TLVs. Some of the most conservative corporations limit exposure to one-half of the of the published REL or TLV.

Strategies for Setting the Alarms in Real-time Atmospheric Monitors 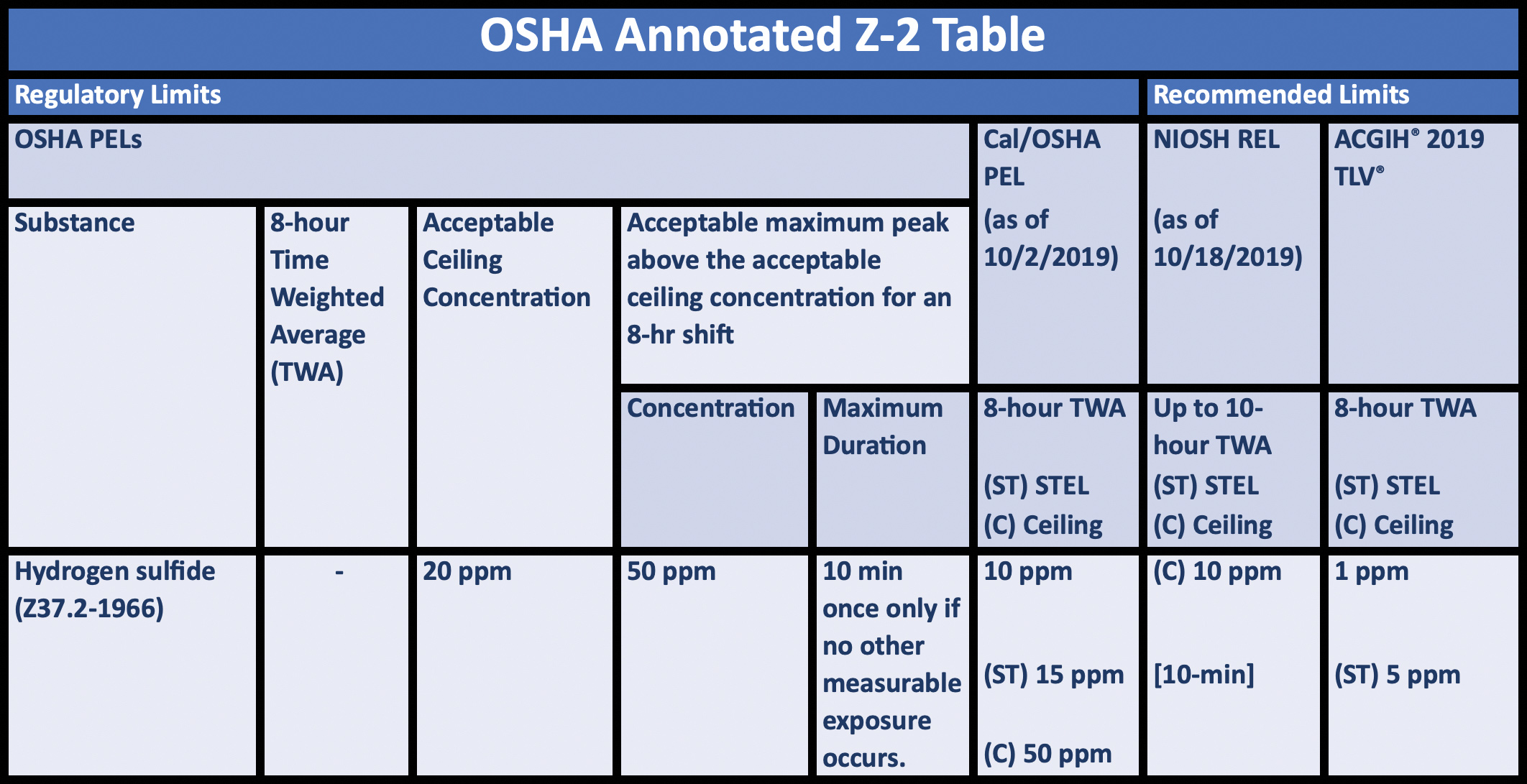 Most OSHA PELs have never been updated since the passage of the Occupational Safety and Health Act back in 1970. NIOSH RELs and ACGIH TLVs are regularly updated, and increasingly more conservative than the PELs.  Some would say too conservative. One of the reasons that there has been so much pushback against the newer, more conservative exposure limits is worry about how to set the alarms.  Instrument users (and sometimes regulators) often believe they need to set the instantaneous “low” alarm at the TWA limit. Fortunately, this is not the case.

Real-time atmospheric monitors have multiple alarms tied to the concentration of the gas being measured. Some alarms can set by users, while others are set by the manufacturer, or required by the certifications carried by the instrument. Most real-time toxic gas instruments have at least four user settable alarms; a “low” instantaneous (peak) alarm, a “high” alarm (also based on the peak reading), a STEL alarm based on the most recent 15 minutes of exposure, and a TWA alarm based on the average exposure projected over a full 8-hour shift. For extended shifts, most instruments calculate the TWA alarm according to OSHA and ignore exposure prior to the most recent eight hours.

The annotated OSHA Z-Tables (https://www.osha.gov/annotated-pels/table-z-1) make it easier to understand the differences between the major exposure limit guidelines; and decide on the optimal approach to setting alarms. Consider the H2S exposure limits listed in the Z-2 Table: OSHA Annotated Table Z-2.

It is a little tougher for instrument users who are required to follow the TLV. The 2012 H2S TLV consists of a TWA limit of 1.0 ppm, and a STEL limit of 5.0 ppm. Setting the instantaneous “low” alarm at 1.0ppm can lead to frequent nuisance alarms due to short term transients above 1.0ppm. Also, setting
the low alarm at 1.0 may not even be possible for many instrument designs.

The ACGIH provides some useful guidance for setting alarms in the 2021 “Threshold Limit Values (TLVs) and Biological Exposure Indices (BEIs)” handbook. The handbook notes that for many substances with a TLV–TWA, there is no TLV–STEL or Ceiling. Nevertheless, short-term peak exposures above the TLV–TWA should still be controlled. According to the guidance, transient exposure levels may exceed up to 3 times the value of the TLV–TWA level for up to 15 minutes at a time, on up to four occasions spaced at least one hour apart during a workday. Under no circumstances should transient exposure levels exceed 5 times the value of the TLV–TWA level when measured as a 15-min TWA.

The same issues apply to other contaminants like NO2 and SO2. Having the exposure limits side-by-side in the annotated tables makes it much easier to develop a prudent alarm setting strategy.

“Standards provide guidance so various groups understand both expectations and their purpose. ANSI Z358.1 explains what is needed to provide a safe environment and the minimum ...
Read More →