May 18, 2021|Gas Detection, Industrial Hygiene in the Workplace

According to OSHA, confined spaces are responsible for around 200 deaths every year, and 60% of those deaths are workers who were attempting a rescue. What is the key to mitigating the risk of working in confined spaces?

In some cases, it could be as simple as reminding workers of acceptable and dangerous confined space gas levels. After all, low oxygen levels are the most frequent culprit of gas-related deaths in confined spaces. 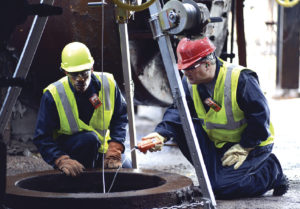 Awareness of oxygen and combustible gas levels is essential for anyone tasked with entering a confined space, but those are not the only gas levels to watch. Workers must understand the particular hazards of the environment they enter and take appropriate measures. (photo courtesy Industrial Scientific)

Awareness of oxygen and combustible gas levels is essential for anyone tasked with entering a confined space, but those are not the only two confined space gas levels to be aware of; carbon monoxide and hydrogen sulfide also are common concerns. However, workers must understand the particular hazards of any environment they are entering and take appropriate measures.

If a confined space’s oxygen concentration surpasses 23.5%, the space is too oxygen-rich and could result in the ignition of combustible gases. On the other hand, low oxygen levels impair judgment and coordination. Extremely low levels of oxygen cause nausea, vomiting and loss of consciousness.

2. Combustible Gases: Since gases cannot combust without enough oxygen, a confined space’s oxygen level can give you an idea of the concentration of combustible gases.

There are two levels to pay attention to when measuring combustible gases:

Of course, LEL and UEL differ for each gas. Methane, for example, has an LEL of 5% vol and a UEL of 15% vol. Methane combustion is possible when the gas level is at or above 5% but below 15%. Gas detectors display a gas’s presence as a percentage of its LEL. An atmosphere free of methane would show 0% LEL on the gas detector, but an atmosphere containing 5% methane would display 100% LEL.

It’s essential to be constantly aware of combustible gas levels while in confined spaces, because they could change over time. A gas far above its UEL won’t ignite, but ventilation could dilute the gas, and its concentration could quickly enter a combustible range.

While both of these gases are extremely toxic, confined space workers need to understand the hazardous gases they are most likely to encounter based on their specific application. Workers may be better protected by monitoring for other common gases.

It is still useful to be aware of the acceptable and dangerous levels of these gases. If carbon monoxide and hydrogen sulfide are gas hazards your workers could encounter, be sure they know the LEL/UEL for the hazards, as well as OSHA’s permissible exposure limit (PEL) for each gas, which sets a limit on the amount of exposure for a worker within an 8-hour period.

Gas hazards are unpredictable and confined spaces are dangerous, making it very important for confined space workers to continuously monitor gas levels with a direct-reading portable gas monitor. Direct-reading monitors not only tell workers whether the atmosphere in a confined space is safe, but also how safe. Is the oxygen concentration just barely above 19.5%, or is there enough margin to allow work to continue uninterrupted?

Safety laws require a pre-entry test just prior to a worker entering a confined space, and workers are only required to test again after leaving the space and preparing to re-enter. Naturally, this leaves a lot of room for error if atmospheric conditions change while a worker is within the confined space—which is likely why confined space injuries and fatalities occur so frequently.

If you rely on alarm-only monitors, this wouldn’t be possible. Because alarms are set to go off at predetermined thresholds, alarm-only instruments won’t give workers a head’s up to potential dangers.

A direct-reading gas monitor displays gas levels, so workers can see the exact reading, allowing them to make more informed decisions about whether entry is a wise choice and whether they can continue their work safely.

Adding continuous monitoring to your confined space entry procedures is a simple way to improve worker safety. You can achieve continuous monitoring by asking workers to wear personal monitors or by using an area monitor inside the space. You can improve safety even further by connecting personal monitors or area monitors to a hole watch through local connectivity, thus enabling monitors to share gas readings and alarms. This way, the attendant always knows exactly what’s happening within the confined space.

Dante Moore is a senior applications engineer at Industrial Scientific.

By: Tim Turney, Contributor In terms of public perception of health and safety hazards in the workplace, few are as well-known as the risks associated with ...
Read More →

Fighting Fatigue in the Workplace

By: James Davis, Contributor According to The National Safety Council[1], fatigue is estimated to cost employers $136 billion in health-related productivity loss annually. However, it is ...
Read More →

By: Logan Myers, Contributor If you work in an industry like construction, mining, oil and gas, or concrete, you have probably asked yourself the question: “How ...
Read More →