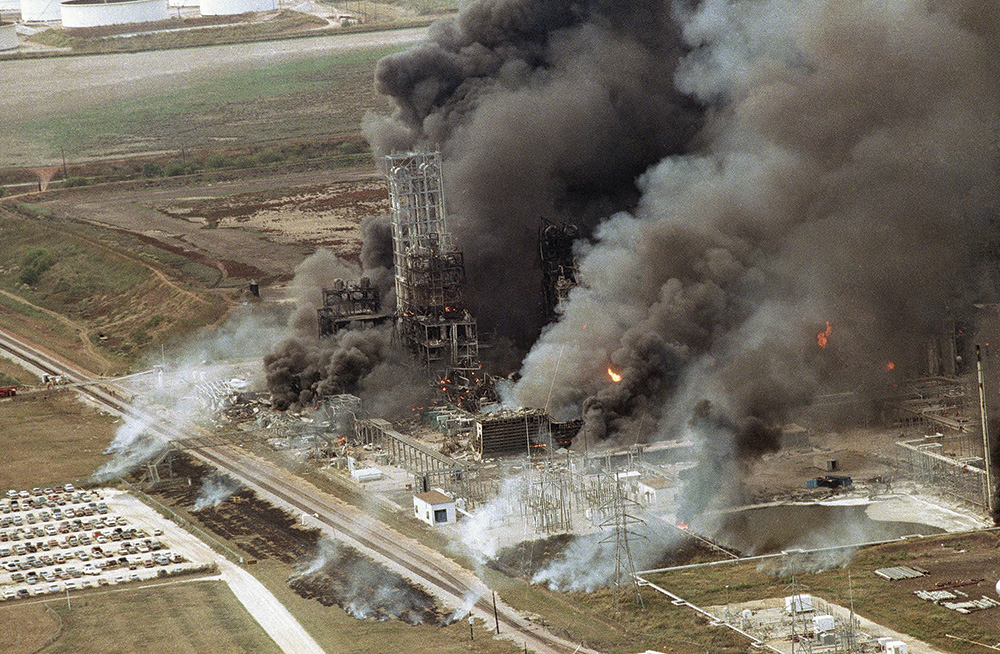 A 2019 explosion in Deer Park, Texas, resulted in several fires that released toxic gases to the atmosphere. One of these toxic gases is benzene, which often must be measured at levels at or below 1ppm. (photo courtesy AP Images)

On March 17, 2019, a large explosion in Deer Park, Texas, resulted in several fires that released toxic gases to the atmosphere. One of these toxic gases is benzene, which often must be measured at levels at or below 1ppm. Measuring this in the field requires tools that are either bulky or require continued use of consumables, increasing the complexity of the instruments.

One proven benzene-detection technology that is often used is a Photo-Ionization Detector (PID), used in combination with pre-tubes. The inherent limitation of PIDs is that while they can detect benzene, they also detect many other gases simultaneously, limiting their effectiveness for city, county and state emergency response personnel. Also, additional consumables are required to identify benzene, and response teams have to be stocked with these consumables. Adding to this complexity is that the consumables have shelf lives, which must be taken into consideration.

Another technique that can be used is traditional air sampling, followed by laboratory analysis. This is a time-consuming and expensive methodology, since the sample must be physically taken back to a lab.

Being aware of these drawbacks of existing technology, Dräger has developed a new solution: the X-pid® 8500®, which combines the PID sensor with another reliable technology, Gas Chromatography (GC).  Dräger uses these technologies together with an advanced, proprietary algorithm to determine the amount of over 19 toxic gases which may be present, including benzene. This analysis is done in under 30 seconds.

In May of 2019, Dräger launched the X-pid 8500, a new technology that combines PID with GC technology to detect Volatile Organic Compounds (VOCs) to the Parts Per Billion (ppb) level. By using integrated GC technology, the X-pid 8500 can seamlessly quantitate pre-deﬁned target compounds in seconds. It is ideal for frequently testing hazardous toxic substances. The Dräger X-pid 8500 offers short test times and low level detection with high precision and accuracy.

Given that the benzene Recommended Exposure Limit (REL) per NIOSH is 0.1ppm (100ppb), extremely low level detection is necessary.  Since benzene, butadiene and other VOCs are carcinogenic in these low concentrations, the X-pid 8500 is optimized for measuring at concentrations as low as 50-70ppb.  Short-term effects of benzene include dizziness, rapid or irregular heartbeat and headaches.

Long-term effects include damage to bone marrow, which can cause a decrease in red blood cells, leading to anemia. It can also cause excessive bleeding and can affect the immune system, increasing the chance for infection[1].

The device combines two different technologies in order to identify the concentration of certain substances in gases: gas chromatography followed by PID detection. The end result is selective VOC detection, where the use of the GC column enables the selectivity of the unit.  In the case of benzene, it allows an analysis in as little as 30 seconds.

Gas chromatography (GC) separates different molecules from each other. In this case, the ambient air passes through a column that separates the gases present, based mainly on boiling point. The gases with lower boiling points generally exit the column first, while the higher boiling point gases come later. Each molecule remains on the column for a certain amount of time, known as the retention time. The column is wrapped up like a coil in the X-pid, in order to combine the physically required proportions on the one hand with the small dimensions of the device on the other.

The photoionization detector follows the gas chromatography column. The gas exiting the column is ionized by UV light emitted in the PID. The high-energy light ejects electrons from specific molecules, creating an electrically conductive gas called a cold plasma. If it hits the detector, a space between two wires becomes conductive and a current flows.

Separating the substances in the GC-column and subsequently ionizing and detecting them will create a characteristic model of a sample. Each detected gas is shown as a peak on a time scale. Volatile substances can be found at the start of this scale, while the more nonvolatile molecules follow as time progresses. Complex mathematical processes help separate peaks that are located close.

The X-pid 8500 does not use consumables to take measurements, resulting in low operating costs.  It requires no pre-tubes, also making it easier to use and helps prevent user errors. Because of the GC technology, compound-speciﬁc measurements for benzene can be taken, even if other VOCs like toluene and xylene are also present. This also results in cross-sensitivities for benzene to be reduced to a minimum, and reduces the number of false-positive measurement results and false alarms.

The robust exterior design, combined with an innovative temperature control mechanism, makes the X-pid 8500 deliver very reliable performance, even under tough conditions.  The sensor unit maintains a constant temperature above the ambient air temperature and separates water vapor from the target compounds. This ensures reliable measurements under tough environmental conditions.

The X-pid 8500 uses an intuitive mobile app that comes pre-installed with an included, explosion-proof smartphone. The large touch screen and familiar user interface are designed for ease of use. No prior knowledge or extensive training is required. IHW

© pressmaster - stock.adobe.com Protective eyewear is not required for people who spend most of their day on computers and other electronic devices. However, there are ...
Read More →