May 18, 2021|Gas Detection, Industrial Hygiene in the Workplace

The use and possession of cannabis is still officially illegal under federal law. The Controlled Substances Act of 1970 lists cannabis as a Schedule I drug, which prohibits even medical use. However, at the state and local level, it is a different story. The laws in many states are increasingly at variance with federal law.

With a doctor’s recommendation, medical use of marijuana is legal in 36 states, and the Rohrabacher–Farr amendment of 2014 prohibits federal prosecution of individuals in compliance with state medical cannabis laws. Twelve additional states have laws that allow access to cannabidiol (CBD) products that are very low in THC, the primary psychoactive chemical in cannabis. Recreational use of cannabis is legal in 16 states; another 14 states have decriminalized its use.

In states where possession has been legalized, production and distribution have been legalized, as well. Growing, extracting and manufacturing cannabis products has gone from a clandestine, illegal activity to a licensed, highly regulated enterprise with numerous requirements for monitoring and mitigating atmospheric hazards. 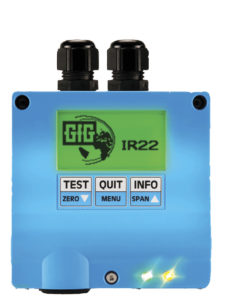 CO2 sensors detect gas by means of infrared absorbance. Readings from the GfG IR-22 transmitter can be displayed at the sensor, as well as remotely at the controller. (photo courtesy GfG Instrumentation, Inc.)

Carbon dioxide (CO2) is necessary for photosynthesis and, without it, plants can’t grow. Cannabis “grow” areas (greenhouses) are controlled environments where light, temperature, humidity and CO2 concentration are tightly controlled to optimize growth and the production of cannabinoids and other active chemicals. Cannabis greenhouses are typically tightly sealed and enriched by adding CO2. The optimal CO2 concentration for growth is between 1,200-1,500ppm.

Carbon dioxide is a byproduct of living organisms and is naturally present in the earth’s atmosphere. The average concentration in fresh air is about 400ppm. At this concentration, it’s harmless but, at higher concentrations, CO2 is toxic. The OSHA exposure limit for unprotected workers is 5,000ppm measured as an 8-hr, time-weighted average (TWA). The IDLH (Immediately Dangerous to Life and Health) concentration is 40,000ppm. Even 30 minutes of exposure at this concentration can lead to irreversible harm. At very high concentrations, even a breath or two can be lethal.

CO2 is colorless, odorless and about 1.5 times heavier than air. It can easily displace the oxygen in fresh air if it is released in an enclosed space. But, because CO2 is also a toxic gas, it’s not enough just to measure the oxygen concentration. In fact, it takes about 67,000ppm CO2 to displace enough oxygen for the concentration to reach 19.5% oxygen—the concentration below which the atmosphere is oxygen-deficient. This is the reason cannabis “grow op” regulations require direct measurement of CO2 levels in the greenhhouse, with readings and alarms visible from the outside. You need to know if a hazardous condition exists before you enter, not after!

In commmercial grow ops, CO2 is typically introduced using CO2 generators or a compressed gas delivery system. CO2 gas delivery systems are often quite sophisticated, using sensors in the greenhouse to control the release of the gas. In non-commercial operations, controls are less rigorous, and CO2 may be generated by open flame burners, fermentation, dry ice, vinegar + baking soda, or even composting. Regardless of the means used, regulations still require a fixed detection system to directly measure CO2 with an alarm set at the toxic exposure limit of 5,000ppm.

Cannabis plants produce more than the active chemicals and oils that are extracted from the plant material for sale. Terpenes are the aromatic compounds that give plants and extracts their distinctive flavors and aromas. Many of the terpenes and canabinoids produced by cannabis plants have a strong odor. Many greenhouses are equipped with scrubber systems to remove nuisance odors and keep the smell from reaching nearby neighborhoods.

Terpenes play many different roles in plant physiology. They can be used to attract pollinaters; to inhibit competing plants; or to discourage animals and insects from foraging. (Think poison oak.) The dominant chemicals that produce the characteristic cannabis odor are myrcene, pinene and limonene. Different strains produce different ratios of these chemicals, but the largest fraction usually comes from myrcene. Many terpenes are known to be respiratory irritants, but exposure limits for most terpenes remain to be determined.

Pinene is an exception to this general rule. Pinene is the largest component in turpentine (about 65%). The current OSHA PEL for pinene is 100ppm (as turpentine), and the thre-
shold limit value (TLV®) is 20ppm averaged over an 8-hr workshift. The IDLH concentration is 800ppm.

Many of the terpenes in cannabis, such as limonene, are nose-detectable by human beings at concentrations as low as 1.0ppm. The best way to measure terpenes is by means of a photoionization detector (PID) type sensor. Stationary PID sensors can be installed within the greenhouse as part of an integrated, fixed gas detection system. PID detectors can also be positioned downstream from air-scrubbing systems to alert operators if there is breakthrough and odors have started to escape. 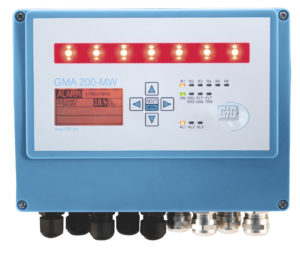 The GfG GMA 200 MW-4 controller is used for smaller, one to four measuring point systems and includes a high-intensity horn and strobe. It is usually positioned at the entrance to the room or area being monitored. (photo courtesy GfG Instrumentation, Inc.)

Cannabis can be sold in the form of leaf or buds, but the most valuable products are essential oils and extracts. Extraction is the process of separating the active chemicals from the raw material and turning it into a usable form. Medical extracts are mostly based on cannabidiol (CBD), while recreational extracts are based on tetrahydrocannabinol (THC). The most common extraction techniques involve the use of flammable gas or solvents to separate the chemicals from the plant material. Extraction rooms are hazardous locations where explosive concentrations of gas or vapor can easily develop.

Biochemical techniques and high-tech equipment have led to new forms of cannabis extracts, such as vape oils, oral tinctures, crumbles and wax concentrates. Common extraction techniques utilize propane or butane; alcohols like ethanol or methanol; organic solvents like hexane or heptane; and CO2 or water. Each method has its particular benefits, and different methods may be used in sequence. The most common recreational extract is BHO. Butane hash oil (sometimes referred to as butane honey oil) is extracted with butane. Butane extraction is relativelly easy and lends itself to smaller operations. However, it’s also easy for a mistake or leak to lead to an explosion.

The extraction rooms where gas and solvents are used are Class I Division 1 Hazardous Locations; these are required to be continuously monitored for combustible gases. Rooms that are immediately adjacent to extraction rooms are Class I Division 2 areas, which must also be continuously monitored for the presence of combustible gas.

Extraction techniques need to separate the active molecules from the plant material without causing them to “deactivate” or lose their bioactive potency. Supercritical CO2 extraction is the most expensive extraction method but also the safest—as it avoids the use or creation of explosive gases or vapors. It is highly efficient and allows for selective purification of the rough extract into multiple products.

In certain pressure and temperature conditions, CO2 behaves as both a gas and a liquid at the same time. This “critical” point is reached at around 1,071psi (the critical pressure) and 90oF (the critical temperature). The temperature is well below the deactivation temperature for the cannabinoids and terpenes that are targeted for extraction. The supercritical CO2 is forced through the macerated plant material. The liquid passes through separators where CO2 is removed and the various fractions of the extract are collected.

Subcritical CO2 extraction, known as winterizing, requires less pressure and uses a lower temperature, non-supercritical liquid form of CO2 . Winterizing takes longer, is less efficient and produces lower yields, but it is easier on the fragile molecules being extracted, which can produce higher quality (and higher priced) extracts. The winterization process usually uses ethanol to further separate the pure cannabinoids and terpenes from other byproducts. Constituents that are not soluable in alcohol or water can be extracted using a range of other solvents, such ether, naphtha, benzene, butane, methanol, isopropyl alcohol and even olive oil.

Use of Portable Gas Detection Instruments 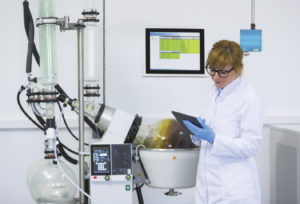 GfG Visualization Software allows readings and system information to be displayed wherever it is needed. The touch screen PC behind the technician’s head shows that readings throughout the facility are in the green. (photo courtesy GfG Instrumentation, Inc.)

All of the sensors used in fixed gas detection systems are available for use in portable instruments, as well. Which sensors to include depends on your responsibilities and the chemicals and processes in use at the site.

Grower instruments should minimally include CO2 and oxygen sensors. If burners are used to produce the CO2 used to enrich the greenhouse atmosphere, the instrument also should include a carbon monoxide sensor. For terpene measurement and odor investigation, the instrument should additionally include a PID sensor. Be alert for other specific chemicals that may be present. For instance, if sulfur pots are used for fumigation, it might make sense to include an SO2 sensor.

Extraction or “manufacturing” instruments should minimally include sensors for oxygen and lower explosive limit (LEL) combustible gas measurement. Either catalytic or infrared LEL sensors can be used for butane measurement, but exposure to alcohol can be rough on the miniaturized catalytic LEL sensors in portable instruments. Infrared LEL sensors are highly responsive to alcohols, and the response tends to be quicker. A PID sensor can be included in the same instrument, or a separate analytical photoionization detector can be used for ppm measurement of solvents and terpenes.

Inspectors and emergency responders don’t always know what to expect. Even though the activitiy is legal and licensed, the facility can share many of the same characteristics as a clandestine laboratory. So, it’s better to be safe than sorry. Emergency response instruments should include the same five sensor combination used for general HAZMAT response: O2, LEL, CO2, PID, CO and H2S sensors.