May 18, 2021|Industrial Hygiene in the Workplace, Respiratory

Monitoring workers for exposure to respirable particulates, including dust, metals, crystalline silica, welding fumes and diesel particulate matter, is being driven by tighter regulations in almost every industry. Employers must be more attentive than ever to the personal exposure of workers. Workers also need to be educated on the potential dangers and health risks of respirable, fine and ultrafine particles in confined space—and be professionally trained in how to avoid exposure.

What is a Confined Space?

OSHA’s definition of a confined space is an area that is large enough for a worker to enter and do work; has limited means for entry and exit; and is not designed nor intended for continuous occupancy. Examples of confined spaces include storage tanks, silos, reaction vessels, enclosed drains, maintenance holes, ship holds, sewers, mines, and utility or furnace rooms with facility operating systems.

The leading method for rapidly determining exposure levels is with the use of direct-reading solutions. Real-time instruments, such as the SidePak™ AM520 Personal Aerosol Monitor, provide instant data to determine if the concentration of respirable particles is too high or is increasing. (photo courtesy TSI Incorporated)

Work such as welding, cutting, grinding, drilling, sanding or any high-energy activity creates respirable particles or toxic aerosols. These can build up to hazardous levels in confined spaces. Any particles 10 microns in size or smaller become airborne quickly and can potentially be inhaled into a worker’s respiratory system. Even more dangerous, particles 4 microns or smaller can enter the human respiratory tract and penetrate deep into the lungs’ gas exchange region.

Respirable particles are detrimental to workers’ health and safety. Airborne dust and particulates are often made up of hazardous materials, including hexavalent chromium, lead, manganese, iron oxides, nickel, cadmium, silica and diesel particulate matter. Many of these materials cause damage to internal organs, including lungs, kidneys, liver, brain, nervous system and eyes. Especially dangerous are materials like silica, which is known to cause cancer. In confined spaces, these particulates can build up quickly. It is essential to monitor the particle concentration to which a worker is exposed, so you can act to reduce contact to protect the worker.

The leading method for rapidly determining exposure levels is with the use of direct-reading solutions. Real-time instruments provide instant data to determine if the concentration of respirable particles is too high or if it is increasing in the worker’s breathing zone. Immediate access to test data also allows you to follow the exposure path to determine the source of the problem and act. Real-time monitoring also provides rapid feedback of the corrective actions implemented to ensure you are reducing worker exposure. 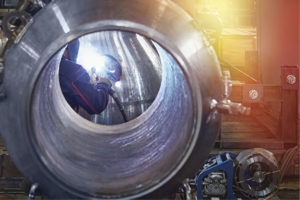 Silica exposure is a significant concern in confined spaces, as respirable silica levels can accumulate over a shorter period with higher concentrations. (photo courtesy TSI Incorporated)

Silica exposure is a significant concern in confined spaces. The potential of limited air movement and minimal ambient air circulation can result in particulate concentrations to build quickly. In confined spaces, respirable silica levels can accumulate over a shorter period with higher concentrations. In response to the elevated risk from silica, OSHA reduced the personal exposure limit of silica dust to 50µg/m3 averaged over eight hours. This level is half of the limit of the previous standard revision. OSHA also added an action level of 25µg/m3 averaged over eight hours.

One of the most common confined spaces is underground mining. Underground mining operations have increased concerns over the level of respirable crystalline silica dust generated. Continuous mining extracts high silica-content rock from the coal. Large quantities of silica dust can be generated during cutting and can become entrained in the ventilating air, carrying the harmful dust to the breathing zones of mine workers. For coal miners, respirable dust monitoring must be performed to avoid black lung disease, also called coal workers’ pneumoconiosis (CWP), which is a result of long-term exposure to coal dust.

The increased use of diesel-powered equipment in underground mining also produces ultrafine diesel particulate matter (DPM). DPM is classified as a possible carcinogen by the National Institute for Occupational Safety and Health (NIOSH) and the U.S. Environmental Protection Agency (EPA). The operation of diesel-powered equipment in underground mines poses an additional need for real-time personal exposure monitoring of particulates in workers’ breathing zones.

Confined spaces in the underground minerals, metals and coal mining industries have the added complexity of workers performing duties in potentially volatile or explosive environments. In these conditions, gases, fuels or other potentially combustible materials are likely contained in the air.

The need to monitor workers’ exposure to respirable particulates from potentially harmful particles is imperative. Employers must be attentive to workers’ personal exposure and educate them about the potential dangers and health risks of respirable, fine and ultrafine particles. Failure to do so can ultimately be measured in lives lost.

Kevin Chase is with TSI® Incorporated.

Sponsored By: “Vector Solutions sees the ANSI/ASSP Z940 standards on EHS training as incredibly valuable resources for everyone involved in EHS training—training producers like ourselves, ...
Read More →