Home » Industrial Hygiene in the Workplace » Ventilation Troubleshooting: Before You Call the Engineer

Ventilation Troubleshooting: Before You Call the Engineer

April 4, 2022|Industrial Hygiene in the Workplace 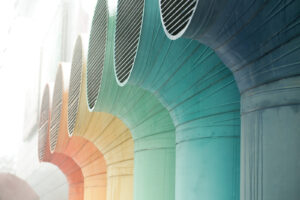 Engineers with experience in industrial ventilation design and troubleshooting are few and far between. Pair this with the fact that increasing awareness of industrial hygiene principles, lower OELs and greater environmental awareness will further drive the need for high-functioning, efficient ventilation systems—and we can see engineers’ time will be at a premium.

However, finding common problems and fixing them before calling an engineer isn’t always as hard as one might think. With a few tips and tricks, you could come out looking like the hero when trying to figure out why your system doesn’t quite work the way you expect.

The fist tip is to find original engineering drawings for a system and, when you do, put them in a location you will remember, and guard them with your life! Many of the systems I have seen have been changed or have had parts replaced that were not a replacement “in kind.” Now those changes are wreaking havoc on the system’s overall performance. If you have the original drawings, you have a treasure trove of information that can help your maintenance team trouble-shoot. Any deviation from these plans should be looked at carefully and evaluated.

When doing a walkthrough of the ventilation system, having the drawings in hand can help inform as to what could be causing loss-of-function issues. 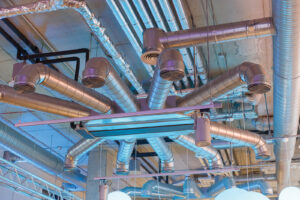 First, go to the workstation and directly check the hood: Does anything seem like it might be a recent (or maybe not-so-recent) addition to the hood? A common story that is told by Jon Hale, in the ACGIH “Fundamentals of Industrial Ventilation” course, is a well-intentioned maintenance person adding expanded metal to a hood to stop material from being sucked into the duct. While this is very effective at stopping material from entering the hood, it is a problem when it prevents air from entering the hood. If you look at the profile of expanded metal, it is squared on the front and back. If you could shrink yourself down to “see” the air movement both in the front and back of the metal, you could see eddies on both sides. Essentially, this creates a wide net to stop air from entering the hood without friction. This loss of efficiency can reduce the reach and functionality of the hood drastically.

Next, see if there have been any modifications to the hood that might change its shape or location. Sometimes a well-intentioned operator will modify a hood so work is faster and easier. While they are to be commended for wanting to work as efficiently as possible, these modifications can also create less efficient hoods that can allow contaminant to escape.

The last, but possibly most obvious, question: Is the hood in the correct placement in relation to work? A walkthrough of most weld shops, in my experience, will have several operators that have ventilation systems running, but they are too far from the workspace to capture the contaminants of the work being done. When hoods are expected to be placed by the operator, constant attention must be paid to have the hood close to and in correct placement in relation to the work. In the case of weld fumes, common “elephant trunk”-type ventilation must be placed opposite the welder, above the weld and within about a foot of the work.  I have frequently seen these hoods above the worker drawing the weld fume and toward the employee. Check with the manufacturer for specific placement if these hoods are utilized. If hoods are not out-of-the-box solutions, refer to the original drawings to see what assumptions were made in operations of a mobile hood.

Many common issues with ventilation systems are not hard to diagnose. Being familiar with the system is the first step toward diagnosing a potential problem. (photo courtesy Adobe Stock)

If hoods look in order, in place and unobstructed, the next step is to look at the duct work. Though, in theory, duct work seems like a place with minimal disruptions, there are some issues that arise from changes in duct work.

One of the most frequent changes that take place in a system again comes from employees doing what they think will be best for their own health protection. Common features in duct work are blast gates that are used to purposefully create an obstruction that will force air to be pulled from other branches of the system. When blast gates are all in the correct position, it creates balance in the system, and all hoods will receive the correct amount air flow. However, if these hoods are moved, it changes this balance and could potentially reduce flow to all other hoods when opened completely. By thinking they were increasing the flow, so that one hood has increased flow while in use, stops all of them from working as intended.

Another possibility is duct damage. Sometimes, during an outage, ducts may become detached, dented or pinched at the hand of a hurried equipment operator. Although a totally detached duct creates an obvious issue, dents or pinches can start to accumulate settled dust in the duct—leading to a blockage.

A common issue with duct work is foreign objects getting caught in the duct; this can lead to material build-up. This might not be apparent by just looking from the outside of the duct, but you can often see obstructions by looking into the duct from the end of a hood. Bottles, food wrappers or even cleaning rags often get caught in turns or blast gates. If these catch-points are close enough to the hood, a quick glace with a flashlight can help identify the reason for reduced airflow in a hood.

The last issue that I have seen while in the field are additions to systems that were included with no change to the initial design. Commonly, new process or work locations are added as business grows or process steps are added. This can require that additional ventilation hoods be utilized for new airborne hazards that are introduced into the workplace. Though the intent is to protect workers, this can lead to issues with the entire system.

The new duct work creates a point in which there are pressure losses and new air flow, which can lead to a reduced capacity elsewhere in the system. Any new duct added to an existing design will require a qualified individual to assess the needs of the system and a new process set-up.

Changes in filter or scrubber equipment may quickly go outside the realm of a simple inspection, but there are some common things that can quickly be remedied. A common energy loss that can be traced back to air-cleaning devices is related to the walls of the mechanism. With time and use, inspection door seals can start to wear out, or the locking mechanism that keeps them shut can begin to fail. An open door can lead to a major energy loss, but failed seals might lead to smaller, incremental changes. These can accumulate with other issues to create changes (before entering the fan) that might only be detected using direct measurement with a pitot tube.

If the system can be shut off during a break period, a look into filter equipment can give clues as to potential problems, as well. Broken, missing or burned filters will allow debris to pass through the bag house and deposit further into the system, where the fan may not function due to dust loading. Filters that are overloaded may be a sign that the self-clean operation of the baghouse is not working properly and causing the filters to clog, stopping airflow through the baghouse.

Seeing a new fan installed with the system can be an encouraging sight when doing a walkthrough evaluation of the ventilation system. However, this can also signal an issue with maintenance on a system. The typical “squirrel cage” design fan uses three-phase electric to operate. If this is not wired properly, the fan will spin backwards. A backwards rotating fan does not blow air as one might think; it will draw air into the fan housing at a greatly reduced capacity—about 30% of the designed capacity. This will create losses from throughout the system, and it can lead to deposition in the duct of materials drawn into the system.

A problem that may not be apparent during a walkthrough while the fan is operating, but is also simple to check, is the condition of drive belts for fans. Slippage of the belt may be causing an energy loss at the fan and a slower rotation speed than what is expected for proper function. 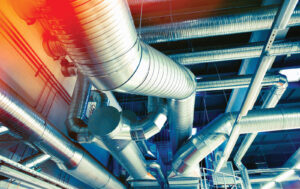 The last component of a system is the exhaust. Once air has traveled through the duct and fan, it must be ejected to allow for new air to be drawn into the system. A blockage here could create a choke point that holds air in the system and stops it from being picked up at that hood. Once again, this is a possible location for issues from well-intentioned employees—the addition of a weather cap, for instance, can create a blockage that was not designed to be part of the system.

Another possible blockage issue is birds or other wildlife building nests. Exhaust points are normally located outside and create a spot for birds to build nests when turned off during weekends or nights. Ensuring that the exhaust is free from obstruction can be a quick and simple fix for low air-flow.

Many common issues with vent systems are not hard to diagnose, with some confidence and familiarity with the system. To help achieve this, I strongly recommend that individuals locate the initial drawings for ventilation systems in their facility. And, when on the floor, spend time to look at the system as it currently stands. This will make future troubleshooting easier.

“ASSP is the  administrator of the technical advisory group (TAG) to ANSI for the ISO TC-283 Committee, the global group responsible for the ISO 45001 OHSMS standard. This role ...
Read More →

Mobile is the Next Frontier In Employee Safety

Ben Kanner, Co-Founder and CEO of Worklete Mobile device use is now ubiquitous in the working world, allowing everyone to stay connected, whether employees are at ...
Read More →